If you know me, you know I like to extend my birthday into a week (or two) of celebrations. This year, I was feeling a bit more low key with a crazy work schedule and Sophie having had a couple of vet visits.

So as she did last year, Jaimie basically spearheaded a weekend of celebrations. This time? A trip to Anza-Borrego Park to see the (in)famous SuperBloom. Because of the heavy rains this year, the wildflowers in the park are bountiful and gorgeous, summoning the basic b*tch masses to worship in the sunshine. All for the Insta. Which is, my darlings, the main reason I wanted to go, much to Jaimie’s chagrin.

However, after the weekend, I am much more in her line of thinking than ever going anywhere again just for the IG.

But back to the camping. Jaimie, Jeff and I set off on early(ish) Saturday morning, and after a quick stop at In N Out for an animal style grilled cheese, we arrived at the Culp Valley Primitive Campground. Note “primitive.” This means that there is nothing but ground and some vault toilets.

When we arrived the campground, it was already pretty packed, by virtue of the the fact it was centrally located in the Park, near the flowers, and had the most amazing views and hiking trails. But Jaimie and I hiked up about a quarter of a mile out, with Jeff trailing behind us, and together we found a perfect little “house,” or two little areas of pitch a tent within a few well positioned boulders and a lookout that basically made my weekend. It was close enough to the campground and car to not feel too isolated, but it still felt like our spot and no one else’s.

We attempted a hike down to the Palm Oasis, which ended up being a beautiful trek into a near death experience. I’m exaggerating, but Jeff meandered off and I got accosted by a rather large lizard. We made it back to the campground, just in time for sunset. 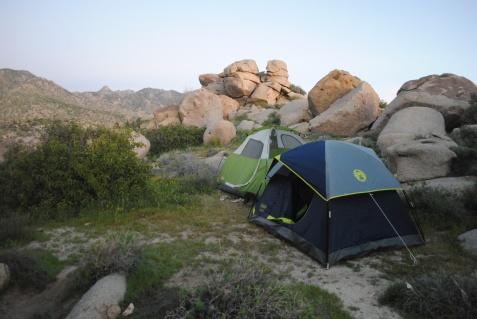 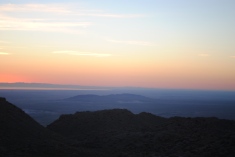 I supplied snacks and booze, because #adulting. But Jaimie packed a birthday dinner of miso roasted veggies and sauteed kale and white beans; Jeff roasted steaks over an open fire. We drank all the wine and looked at the stars, until I managed to crawl into my new tent and pass out. (Seriously, it was so idyllic, I can’t even believe I lived such an amazing night. It’s one of those where you just think, fuck I am so lucky to be alive right now with these wonderful people and great food and perfect weather and everything is beautiful and I might cry.)

AND THEN I WAS FUCKING TERRIFIED. First, I woke up and was pretty sure an anteater was trying to get into my tent. I screamed for Jeff and Jaimie to check it out. Jeff, half asleep, poked his head out of there tent to yell, “Amber, I am 100% sure there is not a creature trying to get into your tent.”

I convinced myself back to sleep, extremely proud that I had recovered from my fears. And then a few minutes later, I wake up to Jeff unzipping my tent and putting his head in, only to harshly whisper, “WE HAVE TO LEAVE NOW.” At which point, I naturally started screaming again and shining my lantern every which way, waiting for impending death.

Yeah, that was a dream too. But my screaming roused Jaimie and Jeff, who I’m pretty sure began to regret this whole birthday trip.

But I think the emotional exhaustion set in, and I nestled in for the night, and woke up to a beautiful sunrise over the Park. We drank iced cold brew and overnight oats with fresh fruit and nuts and then began our trek through the Park for the flowers.

IT WAS INSANE. The major areas were at traffic jam, but we found isolated cactus groves and fields, with bright blooms and far less people. 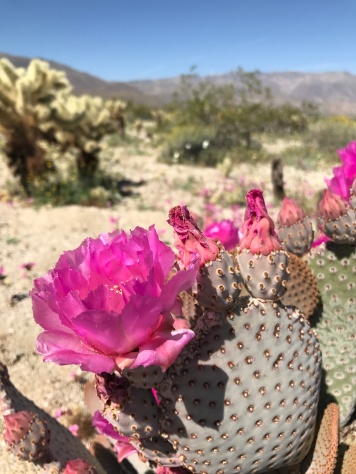 One of my goals is to start camping again, and I am so grateful that Jaimie and Jeff took me along for such a well-prepared and beautiful weekend. It jumpstarted me to buy a tent and other camping thingies (sorry, not enough coffee this weekend), and I feel a new sense of adventure. I am so excited for more of the outdoors this summer and to keep learning the art of the wilderness-ing.